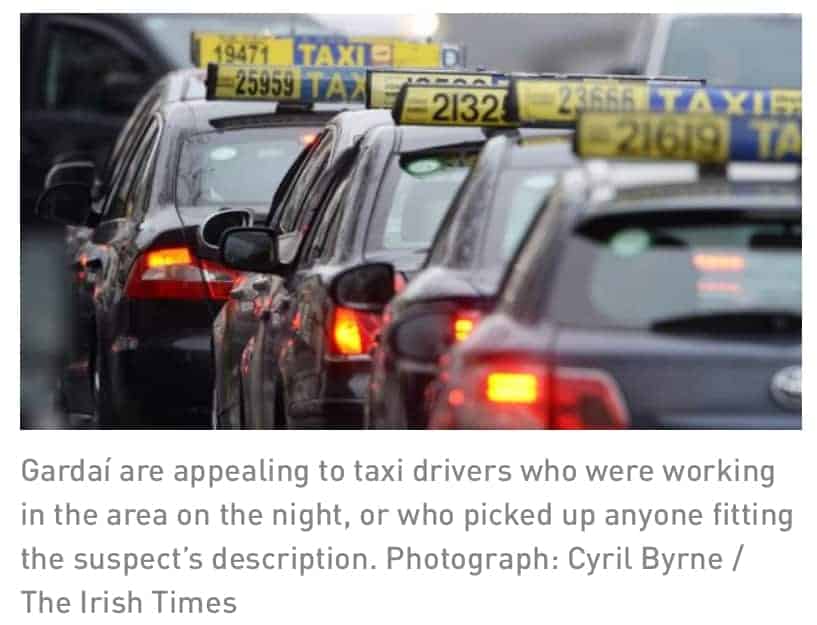 Gardaí in Dublin are appealing for witnesses to a serious assault on a taxi driver at Baggot Street Lower, one week before Christmas.

The driver picked up a fare at the rank on St Stephen’s Green North at 2.30am on December 18th. The man asked to be taken to Stillorgan, but became disruptive and the driver stopped on the right hand side of Baggot Street across from a branch of the Allied Irish Bank.

From their investigations so far gardaí said they are aware that the man walked along Ely Place and back to St Stephen’s Green East towards Earlsfort Terrace and along St Stephen’s Green South and Leeson Street. They believe he may have picked up another taxi in that area.

The suspected offender is described as aged 25-30, 5ft 7in to 5ft 8in, with short hair and wearing a casual jacket and shirt. The man had a Dublin accent.

Gardaí would like anyone who was in the Baggot Street area on December 18th at about 2.30am to contact them. They are also appealing to the drivers of any cars that may have passed through the area and may have “dash-cam” recorded footage to contact them. Gardaí are appealing to taxi drivers who were working in the area on the night, or who picked up anyone fitting the suspect’s description, to contact them at Pearse Street Garda Station on 01-666 9000.