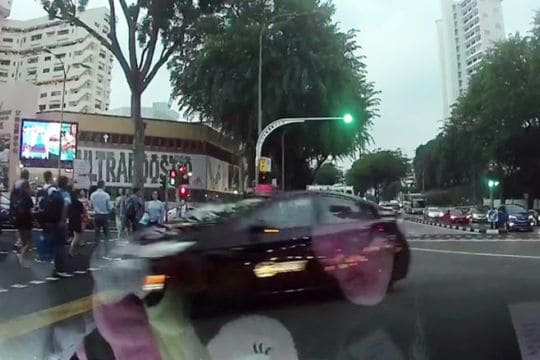 Singapore — Last March 22, taxi driver How Yuen Fah was driving his cab along Queensway when a tumor in his liver suddenly ruptured, causing him to black out.

According to authorities, the taxi driver plowed into a crowd of pedestrians, killing a 66-year-old woman.

Mr. How apparently started his shift as a taxi driver around 6.30pm on March 22. His testimony stated that did not feel tired or sick at the time and had proper rest.

It was when he picked up a group of three passengers from Bishan that he started feeling a sharp pain in his right abdomen.

The sharp shooting pain allegedly was on and off. However, while traveling along Commonwealth Avenue West, he began feeling pain on his neck. He also started breaking out in a cold sweat and his vision became blurred.

Despite his uneasy feeling, Mr. How continued driving and only applied medicated oil to his forehead and nose to feel better.

Mr. How then came to a stop as the traffic lights had turned red.

The last thing he remembered before completely blacking out was signaling right at the Queensway junction.

Moreover, the taxi driver remained unresponsive and the cab was starting to voluntarily move forward.

“The first passenger then pulled the steering wheel to the left to avoid a collision with the vehicle that was directly in front of them,” stated the coroner. “The first passenger stated that he did so as he feared for the safety of the people within the taxi and out of a state of panic.”

The taxi accidentally crashed into at least three pedestrians before it eventually came to a stop when it mounted a curb.

Authorities reveal that the collision claimed the life of Madam Tng Yew Huay, 66, due to severe head injury.

Mr. How and three other pedestrains were taken to the National University Hospital for proper medical treatment.

Medical records show Mr. How suffers from hepatocellular carcinoma, a cancer of the liver.

“The doctor who treated him clarified that the tumour rupture caused severe bleeding into the involved party’s abdomen and a loss of blood flow to his brain,” the coroner stated. “The doctor also clarified that this caused the transient period of loss of consciousness. Based on the evidence uncovered, there is no basis to suspect foul play.”

Mr. How states in his testimony that he was not aware of the tumor on his liver prior to the incident.

Moreover, the coroner ruled the death of the 66-year-old woman an unfortunate traffic misadventure. No charges were placed against the driver.